California’s Medicaid program, Medi-Cal, provides health care services for millions of low-income individuals including children, families, seniors and people with disabilities. Medicaid was authorized in 1965 and makes federal funds available to states that agree to administer their programs in accordance to with Title XIX of the Social Security Act. Medi-Cal is financed equally by the state and federal government and provides comprehensive coverage for essential health benefits, including pediatric services. The majority of the patients CSCC’s pediatric subspecialists treat are in Medi-Cal, as 67 percent of patients in the California Children’s Services Program are also in Medi-Cal.

The number of Medi-Cal enrollees dramatically increased when California decided to expand Medi-Cal eligibility to include those eligible for insurance under the Affordable Care Act. As of 2019, Medi-Cal provided health care coverage for 13.2 million people, roughly one third of the state’s population. Roughly half of California’s children receive benefits through Medi-Cal, which totals about 5.2 million kids.[1] California also covers undocumented children and young adults up to age 26 with full-scope Medi-Cal benefits, meaning they are covered for more than just emergency visits, with access to medical, dental, mental health, vision, and other preventive services.

In the last ten years, the number of children enrolled in Medi-Cal has increased by 61%. Significant growth occurred between 2012 and 2015, as Medi-Cal absorbed the Healthy Families population and the ACA was implemented.

While Medi-Cal is the largest Medicaid program in the country, in terms of people enrolled and expenditures, spending per enrollee is well under the national average, and is less than most other large states. 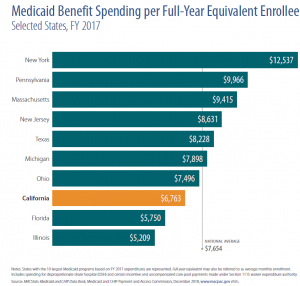 Medi-Cal faces several challenges, such as a disproportionate number of patients and participating physicians. This is due in part to relatively low reimbursement rates paid to Medi-Cal providers compared to other states, and other financing issues like fragmented delivery of care and payments for services.

While improvements are needed to strengthen the future of Medi-Cal, it is an invaluable safety net for millions of Californians.

Meet our members making it all possible.